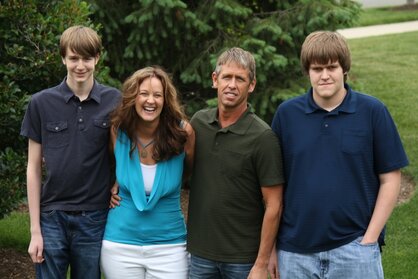 Dr. Dan Martin is our Senior Pastor. Dan grew up in Minnesota and South Dakota. He accepted Christ as his Savior at a very young age. Dan married his high school sweetheart, Liz, in 1990. They have two sons, Alex and Peyton. He has been serving at CCC since 1998. Dan received his bachelor’s degree in Biblical Studies from Master’s University. He received his master’s degree in Christian Administration from Master’s International University Graduate School. He received his doctorate in Christian Counseling from Master’s International University Graduate School. He is a member of the International Association of Biblical Counselors.
Dan is in charge of leading our church. He is a passionate teacher of God’s Word. He loves to be creative with sermon illustrations to make practical application of how God wants us to live our lives. He has brought hot rod cars up on stage, built a climbing wall on stage and rode his triathlon bike to help people to understand a lesson from the Bible. His most popular illustration comes from a love of his own. He loves Krispy Kreme donuts. He tries to bring this subject into many sermons because we all have our favorite foods and can relate as he talks about his favorite food as it relates to the sermon. Dan is passionate about helping men understand their Biblical role as a man. He has preached sermons, given Bible studies, and spoken at events about this subject. His favorite thing to do is to meet one on one with men and disciple them to understand their God given role and grow closer to Jesus. He also loves to lead people to serve at church. Although the church is not the building, but its people the building is important to be able to house its ministries. Much of the facility at CCC has been built or remodeled by volunteer teams. Dan loves gathering people together to work and enjoy making the facility our church home.
Dan loves spending time with his family. He likes to travel and take his wife and boys on fun vacations. He enjoys grilling and smoking all different kinds of meats. His dog Leo enjoys it too, especially if some of the meat falls on the floor. He enjoys all football. He is working at learning to enjoy golf when the ball does not go where he wants it to go, which is more often than he would like.

His life verse is Colossians 1:10 (ESV) “so as to walk in a manner worthy of the Lord, fully pleasing to Him: bearing fruit in every good work and increasing in the knowledge of God;” 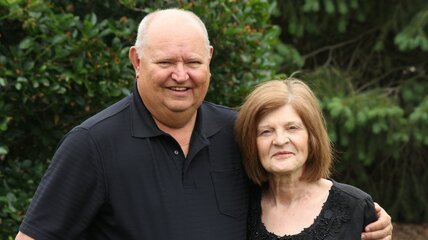 ​Dr. Jack E. Magness is our Pastor Emeritus.  Jack married his wife, Sue, in 1964.  They have three adult daughters.  He has been serving at CCC since 1987. Jack is a graduate of Grace University, Dallas Theological Seminary, and Trinity College. 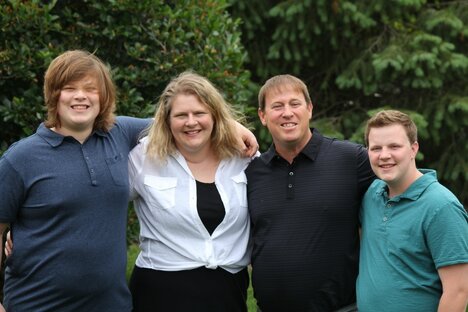 ​Pastor Sam Jackson i s our Youth Pastor.  He  was born in Grand Rapids, Michigan, but grew up on the mission field in Taichung,Taiwan.  He graduated high school from Morrison Academy in Taichung then went to and graduated from John Brown University in Siloam Springs, Arkansas, where he met his incredible wife, Becca.  Soon after moving to Beatrice, Sam and Becca got involved in the youth ministry at CCC volunteering for 5 years before coming on staff as the full time youth pastor in July of 2000. They have two awesome sons Sam II and Micah who both make them proud every day.

A perfect day for Sam would include lots of sunshine, some coffee, and somebody accepting Jesus as their Savior.  If you stop in at the church and he’s not in the office there’s a good chance he’ll be at some student event/activity cheering them on, or building some new contraption for the youth group. Stop and talk with him sometime, eventually he gets to something about Taiwan, his family, or the latest thing God is working on in his life. For some crazy reason he loves to drive the youth group bus, probably because their headed to do something fun. He also has been known to start a bean bag fight, teach students how to do back flips, and he always has duct tape, water balloons, and candy in his office.

Sam’s life verse is ​Ephesians 5:15-17 “Therefore be careful how you walk, not as unwise men but as wise, making the most of your time, because the days are evil. So then do not be foolish, but understand what the will of the Lord is.”

Collin Nemec is our Children’s and Facility Pastor. He was born and raised in O’Neill, Nebraska. He graduated from the University of Nebraska-Lincoln with a degree in Biochemistry in 2018 and later joined CCC that year. He received his diploma in Children’s Ministry from Kidmin Academy in 2020. Collin married his beautiful wife, Hannah, on April 17th, 2021. They have loved working together to teach Biblical truth and concepts to the children of CCC. He hopes that he can help to replicate and honor the children’s ministry that he was so blessed to have grown up in.